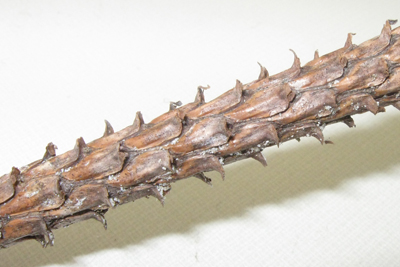 A photograph of a plant stem that resembles the scaled surface of a fiber.

The microscopic scales that cover individual filaments of animal hair are responsible for the fibers’ unique ability to mat or felt together. Felting occurs when the fiber is moist and physically agitated and is enhanced by a change in the neutral pH to either acidic or more commonly, alkaline conditions and the application of heat. With warm water and soap these scales swell open, allowing the filaments to snag and interlock with one another when agitated. This knotting causes shrinkage, resulting in dense, strong felted fiber. Matting happens naturally overtime, as evident in the hair of pets or in the hair of humans that has not been brushed. Extraordinary archeological findings from the Pazyrk burials in the Altai Mountains of the Central Asian Steppes reveal intentional felting of animal hair by humans as a means of creating unwoven fabric for clothing, shelter, and artistic expression since 450 BC. Further evidence, though not nearly as intact, from Catal Huyuk in Turkey suggests felt production as early at 6000 BC.

Although most animal fiber felts (aside from qiviut), select animals and specific breeds felt more quickly than others as well as varying in coarseness. Finer wool fibers are generally used for wearable items due to their softness against our skin, while courser fibers are used for more utilitarian purposes, as they are more durable and pill less. Additional fibers that alone would not mat such as silk, cellulose fibers and even synthetics can be blended in smaller proportions with these animal fibers to create felt, as the animal fibers will intertwine and mat around them. Primarily using wool from Merino sheep and other fine breeds, STRONGFELT either dyes washed locks of fiber or carded wool and then felts or felts the wool into fabric and then applies the color through a submersion dye bath. 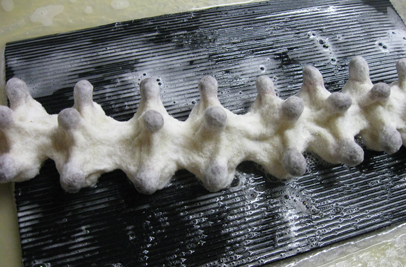 STRONGFELT felts two-dimensionally by first laying out thin, crosshatched layers of fiber to a desired thickness and compressing the wool with soapy water. This wool sheet of loose fiber is then rolled up in bubble wrap and rolled so the bubbles gently move and agitate the fibers into knotting or intertwining between the layers. When the fibers have felted into a stable piece of fabric, the felt is then removed from the roll and fulled or thickened by increasing the agitation, often on a ridged surface. This further tightening of the knotted fibers compresses out the remaining air, making a stiffer, more durable fabric.  To felt three-dimensionally, STRONGFELT either agitates the fiber in hand to create solid wool forms or wraps layers of fiber around flat or form resists, which are then removed after the fiber has been agitated into felt, leaving a hollow form that can be further sculpted by fulling. The fulling technique can also be applied to animal fibers that have been spun into yarns and then knitted, crocheted or woven in order to shrink and thicken the original structure. 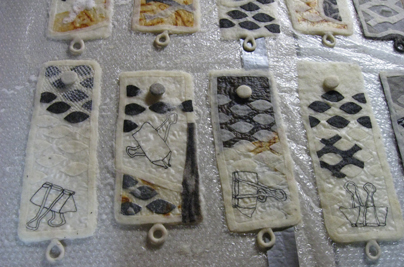 The clarity of line, intricacy of pattern and realism of felted designs as well as the variety of surface textures depends on the imagination and exploration of the felt maker. When working with fiber the staple or length of the individual hair filaments can limit the definition, shape and size of surface designs. By creating sheets of partially felted fiber, one can cut out shapes of varying color, edge quality, shape and size and felt them onto a background of fiber, thus enhancing artistic control. Though this process is more commonly referred to as pre-felt, STRONGFELT uses the term partial felt because as soon as the fibers begin to interlock the felting process has actually begun. There is also a broad spectrum of design results depending on how thick the initial fibers are laid out and how much felting has occurred before the partial felt is actually cut and applied.

Surface textures can be created in the felting process by varying the density of fiber in specific areas, incorporating yarns and non-felting fibers, using resists to create surface planes, embedding other objects and fusing the wool fibers through pre-structured fabrics. Again, more commonly referred to as nuno or laminate felting, fusing initially coerces the hair filaments through the spaces in the substrate after which continued agitation felts the two materials together creating a new textile. Due to the differential shrinkage of the wool fibers and the material fused through, the fiber will continue to shrink, crinkling the fabric into textural variations. Additionally, free-motion machine stitching can be employed to further alter the surface texture of the felt. 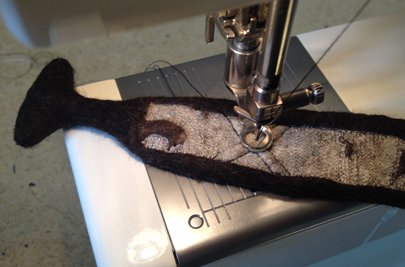 Free-motion machine embroidering in process on a cuff, (STRONGFELT works, 2013)

There are various techniques employed to create felt, some ancient and others that utilize advances in technology. Traditionally, felt was made while wet, rolled up in either a reed mat or animal skin and with human labor, though animal power had also been utilized to assist in the agitation process. Contemporary felt makers now have access to electric felting/fulling machines that agitate the fiber into felt, hand held felting needles for dry felting of fiber both two and three-dimensionally, sewing machines equipped with barbed felting needles and commercially produced needle felted sheets for design. A felting needle has barbs cut into its metal shaft allowing the needle to snag and intertwine individual fibers (even synthetic fiber) when forced through layers of fiber or to force fiber through other substrates. Artisans may only employ dry needle felting, only wet felting or use a combination of the processes until they achieve their desired effect. STRONGFELT works are wet felted, though a needle felting tool may be used for tacking or stabilizing dry prepared 3-D forms prior to wet felting. Needle felting can be implemented for fine surface detailing, though free-motion embroidery is used for this purpose in STRONGFELT works. 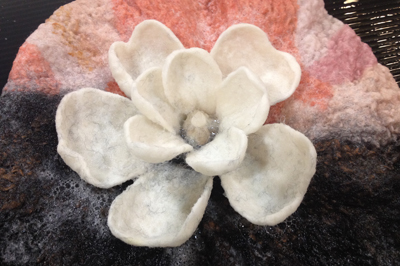 Magnolia blossom crown detail on the head of the figurative sculpture, A Journey, in process with silk entrapped beach glass in the center (STRONGFELT works, 2014)

Though the process of felting does not necessitate exceedingly expensive materials or equipment and just about anyone can add soapy water to fiber and agitate it into a felted mass, control of the outcome and well crafted, quality felt is achieved through years of experience and analysis. Aside from choosing the best type of fiber for the application, one needs to consider: the distribution of fibers for consistent felt, the weight of wool in relation to the area of its distribution to determine shrinkage and shaping through the fulling process, the amount of soap to use to assist in and not deter the process, the temperature of water and rate of agitation at varying steps in the fusing and felting processes, when to cut felt to allow for well seamed edges, how to edge incorporated fabrics in the fusing process so they will not fray and when a felt is stable and finished to avoid surface pilling and destabilizing of the felt through wear and use. In addition to the craftsmanship of the material process, one may also begin to consider the manipulation of the material through the elements of art and principles of design in order to communicate one’s aesthetics and concepts visually.